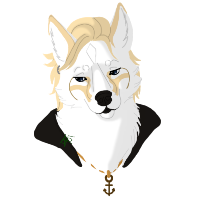 Asher Johansen is a coyote and a member of Del Cenere Gang.

Has a coat that is mostly white and smooth looking with some curls, with just a few light tan marks near the eyes and on his ears, as well as the tip of his tail. He has a bit of light brown that goes from his eyes and nearly meets his mouth in a curve. The top of his head has a light blonde color and makes up his mane when he is in optime form, and he ties it in a top knot. His eyes are a deep blue.

Has a lean body and is quite tall coming to 80 in (6ft 8in) while in optime form, 44 in (111.76 cm) in Secui, and 28 in (71.12 cm) in his lupus form. Despite his lean nature he is strong from his life of doing manual labor. There is a scar that goes across his chest, with some parts trailing upwards and downwards.

For accessories he has a fish hook he reshaped into a curve and uses as an earring. Around his neck he has a leather cord that holds a carved wooden anchor. For clothing he wears a tattered off black coat that looks similar to a pea coat.

His preferred weapon is a harpoon

Tends to flirt a lot, is more than a bit cocky, and speaks in a smooth voice. His posture more than often takes on a sensual nature, and just adds to the way he talks more. Has a calm nature around him most of the time. Can be snarky and sarcastic at times, which has gotten him into trouble more than once. Deep down, if you can manage to get past his cockiness he is a kind, caring, and intuitive man who can easily empathize with others. The problem is being able to withstand him long enough to find this out, which he highly doubts anyone will do.

Has a bad habit of lying, mostly to get out of the tight situations that he gets himself into. He is only truthful to those he trusts completely or views as family. Around children his true nature comes out more, and he tends to be more of a goofball. When angry he can be fierce and is more than ready to defend himself in a fight, and has no qualms about killing, calling him weak is a quick way to rile him up. Is fiercely loyal to those he cares about, or even to his pack when he belongs to one.

Asher was the middle of three pups, and his parents were kind and caring towards him and his siblings. They provided for him, getting him all that he would ever want or need the best that they could. He was considered a bit spoiled by his age mates, and as he grew up his parents started putting more expectations on him since he was the oldest male. Wanting to explore other options for his future, he ran away from home.

He wound up joining a ragtag bunch of mixed canines that sailed the sea for trade, and sometimes for more shady reasons. Asher took to the life on the sea like a fish took to the water. He gained most of his skills while on his travels, and started to act different to his true nature to protect himself better against the harshness that he often met. While on his travels he met a female dog and fell head over heels for her. While his crew was landbound, he spent what time he could with her and was ready to leave his life at sea to settle down with her and start a family of his own.

Unfortunately the female died, leaving him heartbroken and a bit depressed. He threw himself into trouble, at some point gaining the scar that now rests across his chest. Once he healed enough, he decided to find new places to travel to.