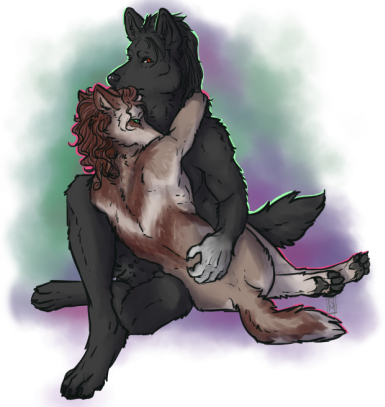 Arlen Stryder is the son of Lyris Stryder and Luca Knight, born on September 3rd of 2016 alongside littermates Myra Garcia and Remus Knight. He currently resides in Casa di Cavalieri as a Second Officer.

For most of his childhood, he was an active participant in the social goings-on of his childhood. He has had a full life surrounded by family and friends who have all supported him in his training to be a warrior of Casa di Cavalieri; however, things turned sour for the happy boy near the end of his first year. After betrayal from a fellow packmate, an attack by the Syndicate, and a battle with addiction that lead him to crippling himself. To make matters worse, that winter, his mother died giving birth to his two newest siblings

After Raine Nightshade was put to death for his crimes, publicly admitting to his involvement in the downfall of one of Casa's most promising youths, Arlen fled in shame for many weeks. When he returned, he tried to put his addiction behind him and begin rehabilitation for both his alcohol problem and his injured leg. During this, he was made the first member below Officer to become a mentor to his little sister Nora Knight. He also struggled with watching his siblings grow up along the Nightshade children who he harbors a deep hatred for. Believes that there is probably more than likely a higher being.