Alaine Winters is the mate of Gabriel de le Poer, and mother of Caillen, Elvira, Elijah, Baratheon, Stannis, and Mairsile?. She served as the only Apothecary of the Cour des Miracles pack until the fall of 2011, when she and her family returned to her birthplace of Airgid Gleann. She is the current matriarch of the Winters family and Dara of the Macha Tribe, where her extensive knowledge of healing and the Coisricthe Religion are put to good use.

Long before her arrival into the world of Nova-Scotia, Alaine's ancestors were born to a small collie-based tribe of Optime-shifters that dwelt in the region previously known as North Ireland. The secrets of the Macha Tribe are well kept, but a belief of the pagan-based Coisricthe Religion they were known to have practiced have been passed down over genetarions into the Winters family. Having gleaned knowledge of their humanoid predecessors, the Macha Tribe developed a language linguistically close to that of Gaelic dialect, and were known to speak it (and an adaption thereof) in all three of their available forms.

Due to inter-tribal wars the Macha tribe dissipated, leaving one small family that clung to their traditions and lived well in the bountiful lands of Airgid Gleann. It was to this small family that Alaine and her siblings were born, in an old estate mansion near to the coast. For a time, she grew in relative peace, and was allowed the fanciful youth of a wildling girl. When she came of a suitable age, Alaine studied the healing lore of her mother (who for a long time had been the clan's only healer) and was also taught all of the practices and rites of her tribe's ancient religion.

When Alaine reached the precious age of 10 months, not yet an adult but at the fragile stage where a girl becomes a woman, a new face appeared among the fractured family, faking pleasantries as an innocent traveler. His name was Banja Romano, and he was to spread great evil throughout her life. As it were, the large wolf was able to lure the young collie-maiden from her family and into his own harem, upon which he revealed a true, cruel nature. His dominance over her was brutal and total, the scars of which still remain embedded in her shoulder (and her heart) to this very day. Banja sired the bastard child Caillen Winters, through no will of Alaine. When the realization came to the girl that she was pregnant with the spawn of this devil, she managed to flee from his grasp, as, complacent with his impregnation of her, Banja had grown lazy in his administrations. Running from recapture, Alaine headed into the heart of Nova-Scotia.

After being nursed back to health by a kindly stranger (who she later came to befriend, a gentleman named Daisuke Ghanjai, the young mother became desperate for a means to provide for her new pup. The boy, born large and early, was sickly in his youth and she worried for his health. Risking capture, the frightened young colliewoman scavenged from a nearby pack, Cour des Miracles. One morning, she was caught trying to steal a young calf from their fields, and she and her son were taken captive for questioning.

Thankfully, the individuals who lived in the pack were a kindly sort, and they quickly forgave the young mother for her desperate crimes. After some time, she slowly emerged from her shell of nervousness, and made many friends among her packmates. Slowly but surely, Alaine rekindled some of her old fire, and before long she was offering to aid the pack in whatever minor medical situations they needed. Her innate skill as a healer, along with her prior training as a medic, provided the young mother with a slow-growing fame within the pack. Soon enough, she was offered the position as the pack's only Apothecary, the lead healer.

For some time after this, Alaine lived peacefully, offering help and aid to any who required it. Given free range of the beautiful and bountiful territory lands, her frail son Caillen quickly grew into his skin, and his health improved dramatically. He grew to be a huge young man, showing the height of his father, along with the inherent elfish beauty of the Winters line.

After some time, the satisfaction of safety began to wear off, and Alaine grew increasingly unsettled in her Cour des Miracles home. A small part of her, growing with each day, longed to return to the wild rolling hills of Ireland, and the silver valley in which she had been born. Now a young man, Caillen was growing increasingly distant and independent, seeking his own thrills beyond the pack's borders. After a hazardous run-in with a blue eyed demon, the Irish mayflower met for the second time with Gabriel de le Poer. Inferni's then-Aquila was a handsome, virulent man, with glossy black hair that reminded her of ravens wings - she mentally dubbed him the Raven King, and had a fleeting, fanciful affair with the man.

Realizing that their passions had grown, Gabriel and Alaine became secret lovers. Meanwhile, and unbeknownst to Gabe and Alaine, Caillen had become enamored with Gabriel's daughter Talitha de le Poer. This obsessive romance, in connection with an increasingly dark state of mind, would unfortunately lead Caillen to press his luck at Inferni's borders. This breach of territory resulted in a dramatic showdown between Caillen and Gabriel's son Ezekiel de le Poer. In the end, Ezekiel would murder Caillen in a quick scuffle by stabbing him through the heart with his own crude antler-carved dagger.

Alaine found out about the death of her son from Talitha, who came to the colliewoman to be rid of the child she made with Caillen, a reserved and dark little boy called Cernunnos Winters. Enraged and maddened with grief, Alaine came to take revenge on Ezekiel for the death of her son. She was stopped by Gabriel, who in protected his own son, kept Alaine at bay. Unable to physically harm Zeke, Alaine cursed him with an old Macha Tribe curse, condemning his children and his children's children to also be cursed.

Having lost her only blood-tie to Nova Scotia, and full of grief, Alaine decided to leave for her homeland. Gabriel, torn between his love for Alaine and his duty to Inferni, decided last-minute to join her. The two lovers have been inseparable since, and have had more children together. 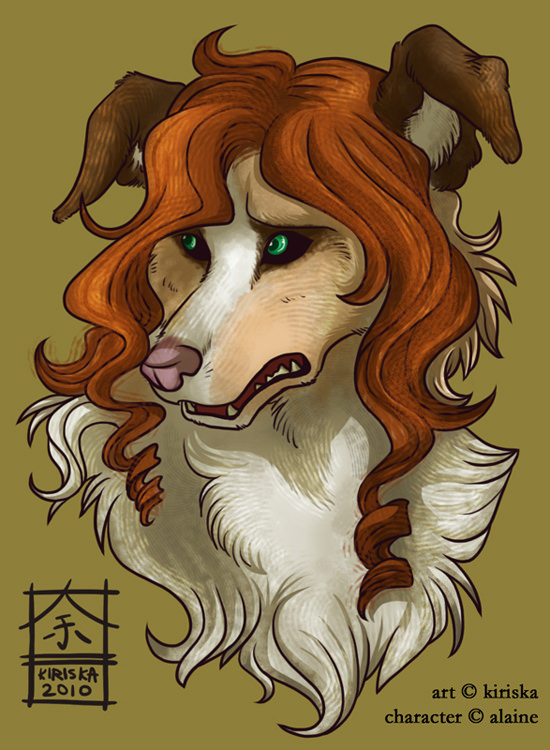 Alaine can be described as nothing less than a mother. Her instincts are sharp, her nerves frayed, and her heart both weak and strong. Alaine is very mistrusting and protective, both because of her mothering instincts and because of her shady past; She would do anything, absolutely ANYTHING for her family. Blessed with a quick wit that has seen her and her pups through many a close shave with death and danger, Alaine has seen too many devils for her to be the innocent, joyful beauty she once was.

Yet despite these trials and the constant pressure of sustaining life, she is caring and kind, never wanting to see suffering in another. She is meek almost the the point of flaw; Submission to those who can overpower her in size and strength seems to be imperative to remaining in one piece. However, watch out: This shy and fragile little pixie also has a surprisingly resilient streak of iron running down her spine! She has had to fight for her life, and kill to survive, and under the right circumstances would certainly do so again. Now, having mastered the art of throwing knives (in particular, her healer's dagger), Alaine has taken her remnants of spite at the hands of fate and turned it into a viable weapon. She expertly toes the line between mild, contained and downright dangerous. Add in her rich ancestral ties, with pagan worship and the power of belief, and meek-hearted Alaine has been known to turn into a wrathful, cursing hellion!

Nana, also affectionately known as 'horse', is a broodmare from the CdM stables that Alaine eventually took as her own. During her pregnancy, the colliewoman required a steed to cart around her fat womb. She was assured that Nana was the most docile, and has never ridden a horse apart from the bay since. Alaine is actually rather attached to the mare, who, although rather round in the girth and slow in pace, has the most placid of natures. As she was a broodmare, her children pop up all over the place. Most of them can be aqcuired from the Cour des Miracles stables.

This is Alaine's preferred form, as she is able to use the dexterity of thumbs to perfect her healing craft. Due to her collie-bred nature, she is notably leaner, shorter and daintier in built to those of wolven blood, however Alaine still maintains a natural and somewhat graceful motion on two legs. When in this form, Alaine is most commonly seen with her fingerless gloves and her Apothecary satchel.

Click the title for image. Alaine's lupus form is that of a regularly built female collie. She has a remarkably soft and silky pelt, more for show as it does little to keep her warm in the cooler months of winter. Note that in this form, the four claw-scars present on her shoulder in Optime form are still visible.

This is the least used of all Alaine's forms, and she has only truly been in it once. The form itself is foreign to her, and she cannot slip into it at will - It requires extreme stress or pain for the transformation to take place. In Secui, she is leggier and rangier, as well as much larger than in her regular Lupus form.

Alaine's most prominent features are her eyes, her hair, and her scar. Her eyes are inverted, meaning the iris (area around the pupil) is LIGHTER than the sclera (white area of a human eye). Her hair is a vibrant auburn color, and when in Optime form, it falls into natural ringlets. Lastly, her scar comprises of four separate claw marks, the center two being the longest.