Agani de'Luah was the adopted child of Tayui Aston and Shaeniire Vanim alongside Ember Agaric. He lived in Jaded Shadows with his two mothers until Shaeniire's death.

Agani is angsty, and his story is too long for this little box. His parents abandoned him in the Concrete Jungle because he was an uninformed product of incest. Agani then found his way to Jaded Shadows, where Tayui took him in because she was already raising one orphaned pup.

Agani was then the center of the attention of a pair of malevolent ghosts, VoidFane and Bloodbane. With the help of Ember's deceased father, Fly, Agani managed to escape from both ghosts and destroy them in the process. Agani then fled from Bleeding Souls in an effort to escape his seer abilities and the multitude of ghosts that 'Souls harboured.

When he realised this would be impossible, he attempted to play the part of travelling seer, and found he was incapable of helping the living or the dead. In frustration, Agani punctured his own eardrums to escape hearing the spirits, and the prayers of his prey. For a time he learned piercing from a wandering were, and when they passed near enough to 'Souls Agani left his company to find his family again. 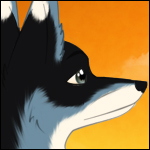 Standing at 8' and weighing merely 250 pounds in optime, Agani is a tall, lanky werewolf. He spends much of his time shifted, but in wolf form he's just as leanly proportioned. His face is sharp, but his eyes are soft and sad. His ears are ill-proportioned to his skull, being tall and wide. He often has things braided into the long mane of fur at the back of his neck.

In colour Agani is largely a steel gray-blue in colour, with silver-white underparts and black upper parts. Most specifically are a saddle on his back and a mask across his face, black backs to his ears, and black knuckles. His eyes are hazel, shifting between dull gold, olive green and pale blue. All of his leather is black, and the insides of his ears are flesh toned.

Agani wears a necklace he once selected to give to Ember, but never had the chance to: a long, silver rope chain, with a triskele charm, to symbolize his divided family ties (Fly/Rain/Aiden, Tayui/Shaeniire, himself).