Aether is currently up for adoption. 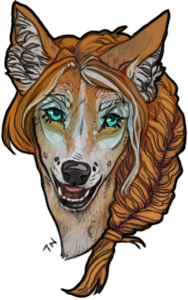 Aether Creed is the daughter of Wraith Creed and Mido born in Inferni on December 22, 2013. She was born alongside her two siblings, Havoc Creed and Vendetta Massacre. She remained in Inferni until its disbandment on August 1, 2018.

Aether is young adult who spent most of her life in Inferni prior to its disbandment. Growing up in a warrior clan offers a number of possibilities for her future. As a mix of mostly coyote and dog, she may also find himself the subject of investigation by coyote purists!

Tammi and Alex reserve the right to reclaim the character if the adopter falls inactive, drops the character, changes huge aspects of the established canon without discussion, or plan to kill the character. See Tammi Adoptions for the full details!

Baubles and art: The adopter will receive all artwork displayed on this Wiki page and image gallery as well as 1 table by Tammi

Aether's mixed heritage gives her a stunning look, even as she grows out of her fat, wiggly puppy body and into than of an adult. Aether is large for a coyote, and significantly taller than her siblings. Even as a young adult her frame is formidable and thick. Her puppy fat is quickly disappearing and being replaced by muscle. Her face is all pointed angles and sharp edges of a coyote except for the large, round eyes she inherited from her dog father. They are a bright blue color that stand out against her sandy colored coat. Her coat, another blessing from her father, is thick and colored with the markings of a husky. Although it is still just puppy fluff, her adult undercoat is growing in giving her fur a more coarse texture. Shades of sand make up most of her coloration, and dirt and dust shades collect around her back and neck. she has the off-white markings of a husky around her underbelly and face. Personality wise, Aether takes after her mother more than the rest of her siblings. The youth can be short tempered, sarcastic, and has little impulse control. She hasn't yet learned to keep her opinions to herself, and says exactly what she thinks. Aether never stops talking. She can go on and on about something forever. Although she can be friendly, outgoing, and funny in a biting way, she hasn't learned that a conversation takes place between two people rather than one. Really, she hasn't realized the importance of anyone other than herself. Aether thinks very highly of herself, even to the point of narcissism. This can cause her to be a bit of a bully and a hypocrite, but it also makes her expect much from herself. She is ambitious, her intense work ethic filed by self gain.

Aether has a very logical mind. Although her stubborn and prideful tendencies can keep her from realizing her intelligence, she picks up new skills extremely quickly. She excels at everything she does without putting in much effort. This is both a blessing and a curse, her Multipotentiality leaves her as a jack of all trades but master of none. She does, however, have a love for things that require physical ability and the use of her hands

Morally, she thinks in black and white, good or bad. The bad part about this is that Aether's "good" can be a universally excepted "bad", and Aether is always good and right. This can make her hypocritical. One side of her personality - the bright, outgoing, talkative, ambitious and fiery side she shows her family and clan mates and the twisted, greedy, vicious, and down right dangerous side she shows strangers and those that offend her.

Aether is terrified of being bored and as a result, is always looking for her next adventure.

Aether is very much interested in trading and acquiring goods, but unfortunately, she does not own much to trade. As a result, she will offer her labour in exchange for goods. This usually involves helping someone with their daily tasks, such as cleaning out the Greenhouse, helping with the horses, or anything that might come her way. Since she learns quite quickly, she doesn't mind helping other members of Inferni perform their rank duties.

She is a bit of a magpie and is attracted to shiny objects.

Aether was born on December 22, 2013. She spent much of her young life growing up with her two siblings, her mother, her aunt Lucilla, her other aunt, Valkyrie, and her uncle, Nathaniel as her closest family. When she was six months old, Wraith brought Aether and her siblings to meet her father, Mido.[1]

When Aether was just over a year old, her brother Havoc decided to leave Inferni to find their father and join Anathema. Aether understood Havoc's desire to learn more about their paternal side of the family, but resents that he left her.