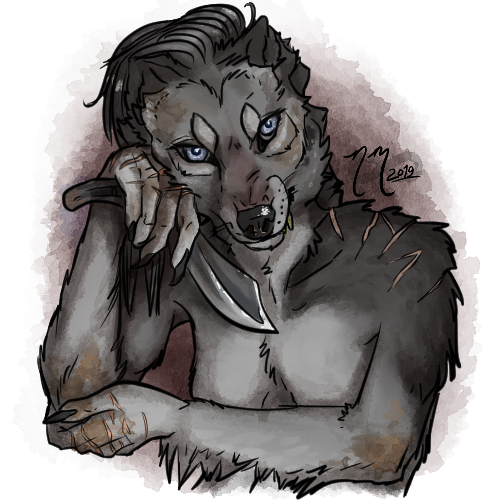 12 is a female coy-dog born in the Florida Everglades as a slave. Her early life was spent as a working girl, used for her body and eventually for her prowess with horses. After an ill-fated romance, she killed her master's son and threw off her chains of servitude, escaping the plantation and began traveling North along the East Coast of North America. She settled in New York for a time, and made a name for herself as a horseman and farrier. After growing bored and becoming somewhat infamous for her vicious attitude and rampant alcoholism, 12 packed up her trusty mule and moved further North to Nova Scotia, where she had heard tell her family once lived before they were made slaves.

She is a nasty woman, seemingly uncaring and nothing more than ugly. Her outlook of the world is extremely bleak, and she doesn't mind telling you that. Life means work, and if you don't do well in your work, you're worthless. Those who work hard and contribute are to be respected. Wolves and high-borns are the scum of the Earth, a point she makes abundantly clear. She wouldn't piss in the mouth of a wolf dying of thirst if it would save them.

Having abandoned her slave family and old way of life, 12 has been pretty much floating along with no real goals, dreams, or morals. She beds who she wants, when she wants, with little to no emotional attachment. Often, she drinks herself into a stupor, sometimes for days at a time. By observing her, it would be no far stretch to come to the conclusion that she is trying to put herself into an early grave. Yet she endures. 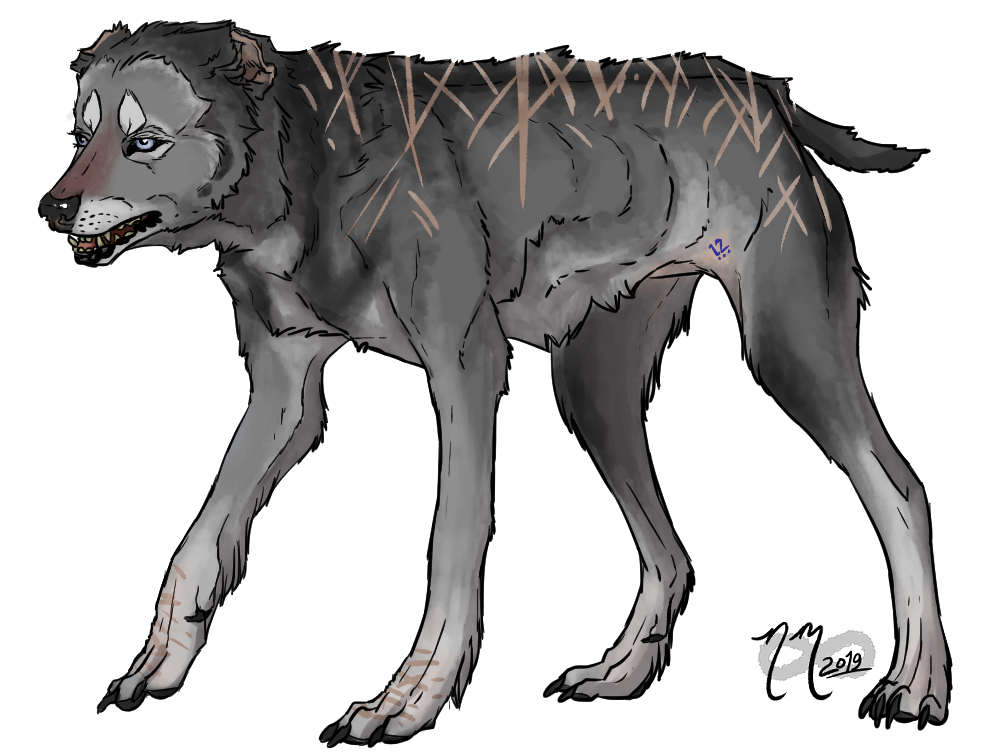 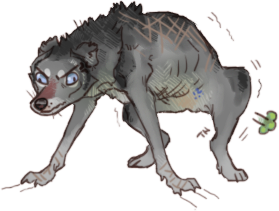 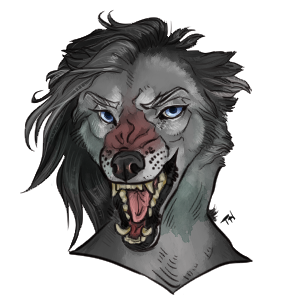 TL;DR: Unfriendly, extremely crass, and not afraid to speak her mind. There wont be too many people who will warm up to her, and she will most likely never warm up to anyone. She does have a pretty good sense of humor though, if not a little dark. Extremely rough around the edges and just unpleasant to be around.

Born to a slave coy dog brood-mother and an unknown coyote father, she is her mother's 12th child, and was born into a litter of three. At birth she was branded with her number, and her ears and tail were cropped, as was custom with the slaves. As a puppy she was pretty much ignored by both slaves and slave-masters alike, allowed to be fed at her mother's teat with few worries. She was not aware of her social condition until she came of age. Of course with sexual maturity came more attention, and she was frequently bedded by both her master and other high-born wolves.

She and the other slaves belonging to the wolf-dog worked his plantation and stables; 12 eventually was put to working with the horses. As she matured, she began to put little care into her appearance, frequently being punished for failing to partake in even the most basic of hygiene. The scars from the lashings eventually became part of the shroud of ugliness she wanted to hide behind. Soon, men no longer took her to bed, and the only reason she remained in servitude was due to her skill with the horses. In adulthood, she learned to break, tame, shoe, and even tend to horses medically.

Eventually, the master had a son who came of age, and wanted to learn more about horsemanship. 12 was told to teach him all she knew, and after spending a great deal of time with him, they began to bond. For the first time in 12's life she felt as if she had worth, for the master's son treated her with respect. For a time, she even believed he may be falling in love with her, as eventually his respect turned to gentle wooing. 12 began to have fantasize of running away with the boy, starting a new life, and maybe even a family; a fresh start. She divulged this dream to only her sister, someone she believed she could trust.

One day, the son had her summoned to the stables late at night. 12 quickly packed her essentials, and went to meet him, thinking that they were going to steal away together. But when she entered the stables, not only did she find the son but also several of his friends. It was revealed then that the son had been playing her all along, that his affections were only a ploy to have her groomed for his play thing. At this point, she was quite the beautiful young woman, and had taken to bathing and freshening herself often, in anticipation of his affections; she was a jewel among the slaves, despite her scars.

He had called her there so that he and his friends could rape her.

12, distraught and full of anguish, pulled her knife from her pack and slit the son's throat, and then gutted the rest of his friends.

With the blood still on her hands, she quickly packed up her items onto a mule and got the hell out of dodge. She traveled North, not stopping until she made it out of the Everglades, only then did she take time to relax, despite knowing that bounty hunters would most likely be on her tail. So, she continued onward for several months, until eventually settling in New York. There, among the bustling society, she disappeared into obscurity, and figured that no one would be able to find her.

She spent a good two years in New York, and was lucky to find herself an apprenticeship under a black-smith. From her training with him, she honed her skills with shoeing horses, a necessity in the city, were cobblestone and crumbling concrete were harsh on equine feet. She soon became the premier farrier of her burrow; but with notoriety came wealth, and with wealth came shame. 12 hated elitists, and felt she was becoming too comfortable with her life and had gained too much success. She began to drink more heavily, and spent a lot of her time at the brothels, spending nearly all her income from her trade and gaining a large amount of debt.

After she felt she had exhausted her time in New York, and to escape lone-sharks and debt collectors, she left the city in the early morning of the first day of spring, once again heading North. Her destination; Nova Scotia; when she was still young and a slave, her brood-mother had told her of the place up in the cold and had sworn up and down that their family had once been free there. She doubted the story was true, but there was no harm in finding out. Besides, up there was the wild-west of the Luperci world, where the packs were still barbaric and even a fuck up and former slave like her could settle, do hard work, and perhaps die comfortably.