Oglethorpe was the name given to the initial camp set up by the crew of the Double Down, an exploration and trading vessel from Savannah, Georgia, which arrived in November 2020.

In fall 2022, a second ship, the Rebound arrived. A new leader took control of the sparse settlement and began instructing the constructions of new buildings for new purpose. Despite a literally earth-shattering interruption and the loss of two group members, construction continued on...

Still no formal territory claim has been made, but Oglethorpe's increasing active presence in the area can't be denied. Their harbor in Mersey Bay now comprise three piers of increasing size. The Rebound can usually be found docked there, along with one or two small, two-person fishing boats.

The settlement comprises a number of wooden buildings, entirely Luperci-made, including cabins, guesthouses, and storage. Worn paths wind around the area leading between the settlement, the docks, the lake, and the far coast. A large building is under construction just outside the settlement and another, smaller one is in construction near the entrance of the restored Bay of Fundy.

Travel-worn paths are evident throughout the area, with much regular travel occurring between the settlement, the docks/harbor, Rabbit Lake, as well as the eastern side of the territory, near the Inlet of Fundy. In some areas, rocks have been set down specifically to kill the grass, making the pathways even more obvious.

Rosewood Pembroke is often patrolling or hunting in the general area and is the most likely first point of contact for visitors. However, Timothy Franklin may be found logging or hauling logs around, sometimes under Roadway Waxflower's direction. Dawnsong Pembroke is often studying flora in the area, but rather than engage, is likely to try and sneak away unnoticed if she spots a stranger. 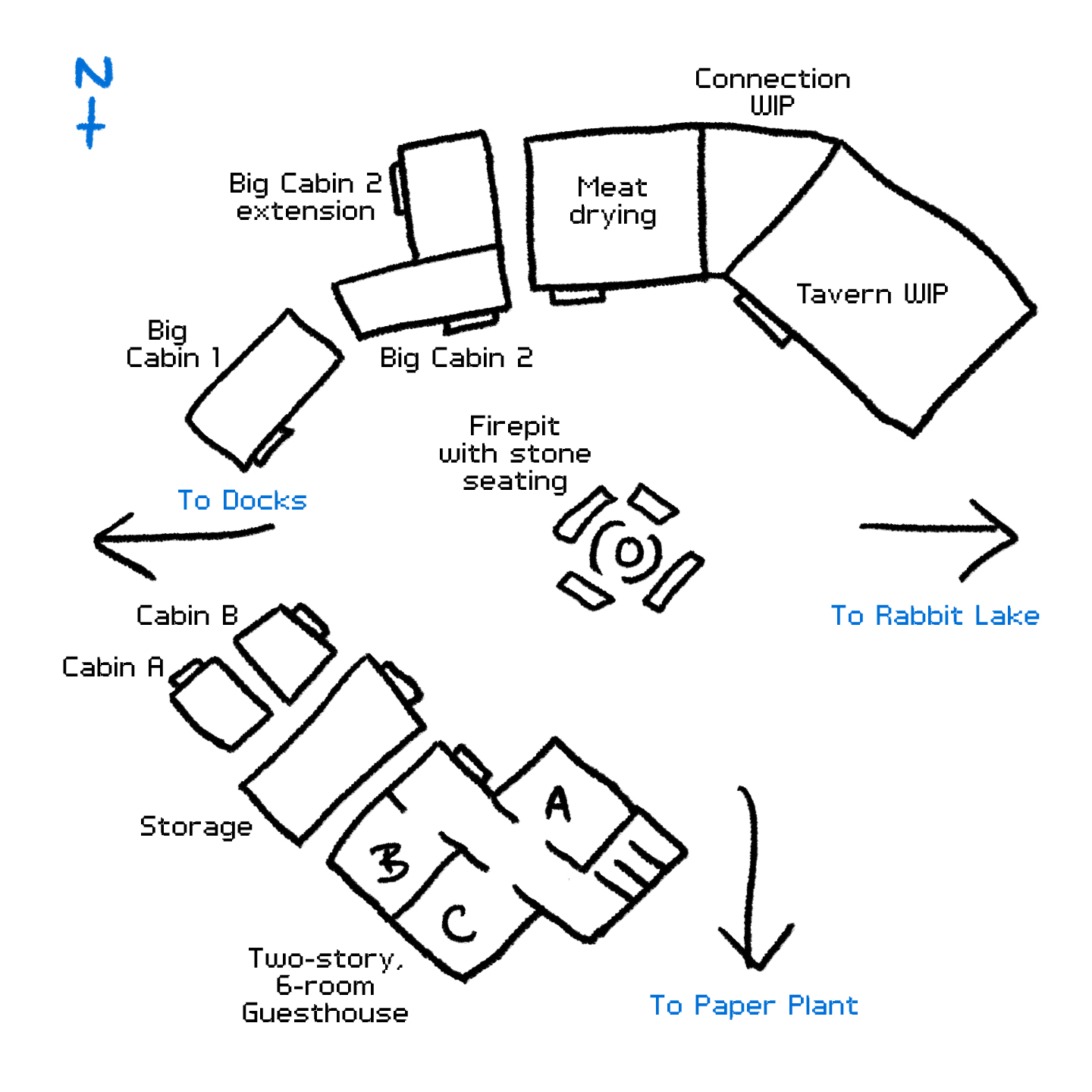 The settlement is gradually becoming a proper village and is situated halfway between Mersey Cove and Rabbit Lake. It is entirely Luperci-built and currently comprises of a two-story six-room guesthouse, two large cabins, two smaller cabins, two permanent lean-to (not shown), a storage shack, a meat-drying shack. The buildings are loosely arranged around a large fire pit with smooth stones for seating.

A short distance from the meat-drying shack is a large tree with several metal meat hooks strapped to a branch just above eye level. There are sometimes deer or boar carcasses hanging here in various states of processing. Further off to the side are a collection of prey bones.

A building is currently under construction as a large annex to the meat-drying shack.

This two-story building is under construction a short distance from the rest of the settlement. Most of the structure and its roof are in place, but walls and floors are still being filled in.

The harbor comprises three piers of different lengths, from 40 ft to 100 ft from the shore. A mixture of red pine and white ash wood, stripped of bark and waterproofed with a variety of fat and oils, some portions of the dock feel a little unstable and wobble slightly, especially under heavy loads, but it's probably fine!

Overall, there is currently enough space to anchor four to six small to medium-sized vessels and a number of two-person boats or canoes, though Georgia is unlikely to allow anchorage to strangers for safety reasons.

The coast around the harbor is once again a wood processing center, with logs in varying stages of being measured, cut, sanded, etc.

A large, multi-room building is under construction here.

Goods and services sought and offered.

Scenarios and proposals for trade can be requested. If approved, trades don't need to be roleplayed explicitly (though players are certainly welcomed to!) and can be assumed to have happened.

Oglethorpe has a number of guest spaces available for visitors. A room for the night and a single meal (dried or fresh fish, depending on what's available) can be traded for the following:

So if a someone wants to stay for five nights and has nothing to trade, they can work the five days they're there as payment. If you'd like a character to stay more than two weeks (14 days), please SA know (you don't need permission per se, but we want to be aware!).

A tavern-like establishment is currently under construction, but more labourers are needed to see it to completion...

No official entertainment is offered at Oglethorpe, but if Gingerbread is around, they'll probably tell you a bunch of very interesting and probably very untruthful stories about all sorts of adventures, whether you asked or not...

After months of unlucky weather, detours, and delays, the Double Down lands in the Broken Occident near the end of October 2020.

The crew set up tents and lean-tos for their camp while they begin construction on a dock in the harbour and proper cabins. Foundations were laid for the settlement's initial buildings in December 2020. By fall 2021, six buildings are complete.

But while Oglethorpe trades a bit with nearby packs and a number of loners, it never becomes the bustling trade hub that Bluebonnet imagined, and in early 2022, she decides to leave to return to Savannah, along with Melrose. Some of the rest of the crew (and guests) are dropped off in Portland, where other Savannahians had begun to establish a presence, as originally planned.

Three members of the Double Down's original crew remain at the settlement, where they continued to live in relative isolation for a few months until the arrival of the Rebound.