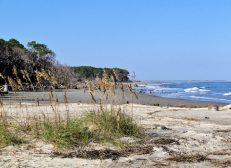 Baten Kaitos is a sprawling, coastal settlement located in South Carolina, home to a religious group made primarily of coyotes and wolf-hybrids.

Baten Kaitos by Luperci standards, is a rather 'urbanized' settlement. Most members live in very simple huts or cabins, and rarely ever assume any form other than Optime. The general air of the area is that of a quaint, medieval village. The area has a small port and specializes in the horse trade, using a large herd of horses bred from the wild Spanish mustangs stolen from Currituck Banks in North Carolina. The human structures in the area are mostly gone, destroyed in a wildfire that occurred a year after the appearance of Luperci in the world. Baten Kaitos enjoys the relatively mild climate of South Carolina, and is a mostly peaceful place. They suffer from a few unique problems — namely dealing with the large bear population that plagues them.

Baten Kaitos is home to an offshoot of the D'Angelo and de le Poer families, and is the birthplace of Bellatrix D'Angelo, the great-grandchild of Ahren de le Poer and Matinee D'Angelo-Dukker-de le Poer, and great great niece of Misery D'Angelo.

The culture of Baten Kaitos is rather regulated, all members must adhere, or at the very least pay respect to Zibal, and must follow one of the most important doctrines of the faith — never shifting out of Optime form once one is old enough to assume it. The group is overall peaceful unless provoked, and once pushed they will reveal their training with a vicious counterattack.

Clothing is a must in Baten Kaitos, its considered rude and uncivilized to be nude, though they begrudgingly tolerate the behavior in outside visitors. Women tend to wear leather and other rough materials, while men wear cloth and finer fabrics.

Architecture and human relics are of great importance to Baten Kaitos, and the most prized building in all of the settlement is one of the few standing human buildings, a restored former Baptist Church where they practice Zibal.

Predominantly coyotes, they accept wolves, hybrids, dogs, and any other creatures as well.

Luperci, Optime is required to be a resident of the town.

Baten Kaitos is located south of Miami Beach, in a relatively large forest. The former human town's name is long lost, and the town was burnt to the ground during the emergence of the luperci. The town is formed along the coastline to provide access to the small port and ocean.

The residents of Baten Kaitos are rather handy with technology, and employ daily use of stone and bronze tools. They have a few blacksmiths, and the trade is among the most highly prized in the area. They live primarily in simple roundhouses or rough cabins.

All residents of Baten Kaitos are required to become adept in some form of weaponry. This can range from spears, slingshots, bows, swords, anything that can be used both offensively and defensively. This skill becomes key during the Rite of Passage for permanent residency in the land, the killing of a bear. Bears often threaten the populace in their search for food, and to earn their place among the citizens one year to two year old members of the area are sent into the woods with only their chosen weapon. They are not allowed to return to the land until they have acquired a kill, and must skin and return with the pelt of the bear.

The ruling system of Baten Kaitos is relatively simple, their is an inherited position of King or Queen, and that has been held by the Sargas family. Beneath the monarch a Council exists, composed of three individuals chosen by the populace. The Councilman of Faith, leader of religious affairs and law, the Councilman of Commerce, responsible for trading horses and overseeing the barter system in the town and with other nearby populations, and the Councilman of Defense, who oversees the training of Warriors, the Rite of Passage, and any matters of war. Citizens bring any complaints to their respective Council member, and the Council member makes a decision or brings the matter to the King or Queen for a decision

The law in Baten Kaitos mostly comes down to the simple idea of an 'eye for an eye', with some modification. If one was to steal another's sword, they would be required to give back the item and something else of value as well. Reparations are key to keeping peace in the community. The death sentence is carried out regularly for crimes such as murder, rape, or any extreme forms of cruelty. The warriors of the town normally carry out the execution, but victims or relatives of victims have the chance to do so as well. The Council's decision on matters is important, but the King or Queen's word is absolute.

Baten Kaitos welcomes visitors, especially those with goods for trade. They do not allow Outsiders to enter the House of Zibal, their Church, or to roam the settlement in any form other than Optime. Respect is important and any Outsiders behaving in a rude or violent manner will be forcibly removed.

The dominant religion of Baten Kaitos is Zibal, the worship of two distinct Gods. Regulus is the God of the Sun, and Dubhe, the Goddess of the Night and Stars.

Followers of Zibal believe that in the beginning, the world was empty, and grey. In time, Regulus and Dubhe appeared from the nothingness. After a long battle, the two made peace and divided the world into two halves. Of Regulus came men and the daylight, and of Dubhe women and the night were born. The two came to a tense peace and their eventual union led to the creation of wolves, and they gave the world the gift of the luperci.

Regulus is the God of the Day and men, and he appears as a red-gold furred luperci with flowing, wild golden hair and bright yellow eyes. He holds dominion over Peacekeepers, the Arts, men, farming, and horses. Followers of Regulus are devoted and gentle, and characterized as tenderhearted and honest.

Dubhe, the Goddess of the Night and Stars, appears as a black furred female with short silver hair and midnight blue eyes. She holds dominion over Warriors, the Stars, Prophecy, crafting, women, and birds. Followers of Dubhe are expected to be intelligent, secretive, and stoic. They make excellent spies and loyal warriors.

A luperci is expected to follow their gender's deity, though one can pledge loyalty to the opposite deity with no repercussion, one is just considered a bit 'peculiar' when they do so.

Followers of Regulus are often tattooed with a red sun, or flames.

Followers of Dubhe often get tattooed with a white moon or blue stars.

The religious leaders of Zibal are referred to as Shamans and they enact all religious ceremonies. Most important events in a luperci's life have a religious counterpart (birth, mateship, death) and are highly revered events.

The highest honor one can achieve in following Zibal is to become a Prophet, which is a canine capable of reading the stars and divining the future from them

The Celebration of Birth is a ritual performed when a young member of Baten Kaitos reaches one month of age, and is given their name. Depending on gender, the ritual takes place in the early morning or at midnight. The pup has the symbol of their respective deity drawn on their head with a mix of dyes, and is chanted over and blessed. The pup is then named and formally introduced to the population of Baten Kaitos

Other practices happen as well.

Prayers are almost exclusively done during the deity's reigning hours, and often involve the sacrifice of small animals or herbs

Baten Kaitos was formed by desperate coyotes during the wild days of the first luperci emerging. The founder, Rana Sargas quickly established the Zibal faith and the peaceful practices of the settlers. The Optime form was seen as a blessing of Regulus and Dubhe and quickly became the norm of the land. The settlement has avoided war for the most part, and only constantly struggles with the large and vicious bear population